Skip to content
Posted inBlog In the News What's New at Trudeau?
Posted by By Kathleen Layton September 15, 2021 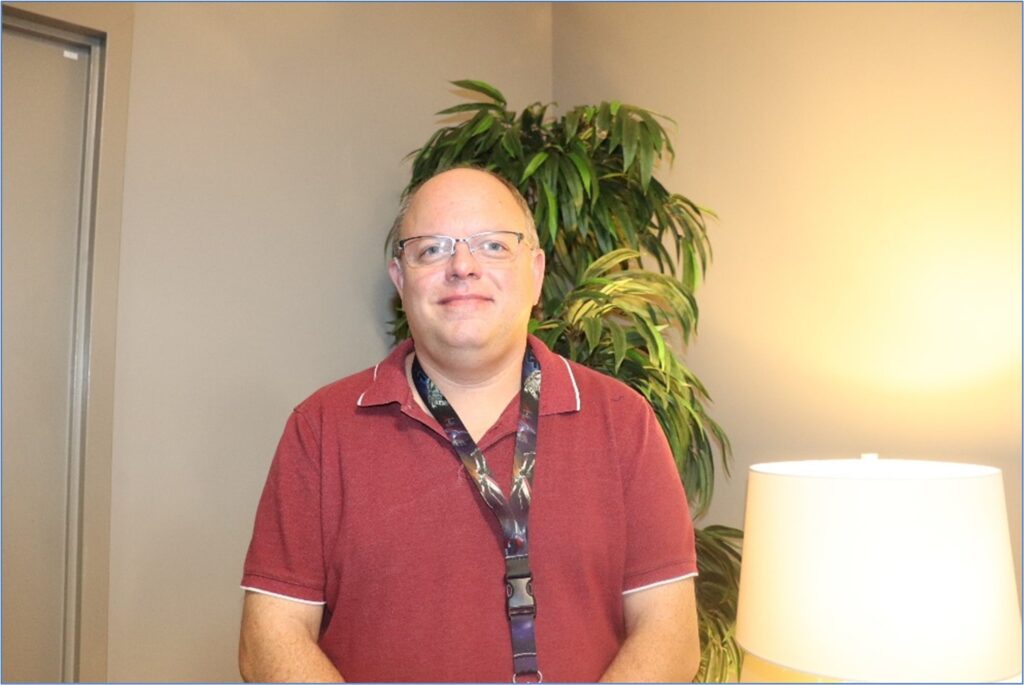 James Litvack has had a long history with the J. Arthur Trudeau Memorial Center. James started in 2000, left in 2005 to take advantage of a new opportunity, then came back in 2013. And he hasn’t looked back since! As he says, “I just keep coming back.”

James is a DSP (Direct Support Professional) with Trudeau’s CSS (Community Support Services) Yes, that’s a lot of acronyms but as James explains, “I help people do the little things that others take for granted.” The day that James and I met, his workday included taking someone food shopping. James shares that budgeting, pre-planning how much food to purchase, and cash transactions are tasks that he works on with people before and during a typical shopping trip.

When he was growing up, James’s parents operated a day care where he spent a lot of time. Many of the children had developmental delays and James thinks that having that exposure helped shape him into wanting to be a DSP.

“I feel a sense of accomplishment when somebody doesn’t need my help with a task anymore,” James shares, “The goal is that someday, they will be able to do the task on their own.” When this happens, it’s a career milestone.

James graduated from high school at the Rhode Island School for the Deaf and after graduation, he was offered and accepted a job there as a job coach. He loved that job and went on to earn his bachelor’s degree in psychology at Rhode Island College in 1994. James leans on his degree, insight from his DSP peers, individuals supported and the entire team at Trudeau when working.

While James cringed at remembering how long it has been since he graduated from college, he has a young spirit. When asked what he likes to do outside of work, he playfully confesses to an out-of-control Star Wars, comic books and superhero addiction and admits that he must rely on others to “inform him on anything related to sports.”

James went on to share that he once worked with a man who always wanted to play tennis and basketball. Although James did not share his fondness for playing sports, he asked the man to help him learn more about sports. At the end of their training, James started good naturedly referring to him as “coach.” As James explains his job, you get the sense that he’s learning as much as he’s teaching.

“James extends tireless contributions to our team and grand support and advocacy to our participants.  If there is ever a need, James is there to help. He always brainstorms ways to try and make things better or easier for our team. James looks out for and shares fun activities and important information that could benefit all.“

Thank you, James, you are Trudeau’s own superhero!